I buy Buffalo Mozzarella at Costco, if you can't find it they also have a few different 'fresh' mozzarellas to choose from, just make sure it's fresh and has good flavor.  Find your favorite tomatoes; heirlooms are good but expensive.  I usually buy tomatoes from our local farm stand right around the corner.  They're picked at the peak of their ripeness, organic, and local!  The other key ingredient is a really good balsamic vinegar.  In this demo I used a Fig Balsamic vinegar that is outstanding, or you can 'keep it real' and not use any vinegar.  A few drops of extra virgin olive oil, some salt and pepper...and dig in!!!!!  Enjoy the video...special thanks to Leo for his commentary :)

Here's an EASY appetizer, that is fast, inexpensive, right out of Creation, and DELICIOUS!!!

Cut off the excess roots and stems of beets.  Coat in olive oil, salt, and pepper.  Wrap tightly in foil and roast in oven at 400 degrees for 45 minutes to an hour (depending on how big the beets are).
Let them cool completely and remove the skins with your hands.  Slice them cross-wise into 1/2 inch slices and cut them out with a small bite-size cookie cutter ring.  Top with a small dollop of Goat Cheese and place 1 pistachio (Shelled) on top.  Serve on a nice tray at a party or set out and let your guests pop 'em back!!!

Here's WHY you should eat your veggies

My long-time friend Marilyn Hyder sent this to me yesterday, check this out...


EAT LOTS OF SWEET POTATOES
It's been said that God first separated the salt water from the fresh, made dry land, planted a garden, made animals and  fish... All before making a human. He made and  provided what we'd need before we were born. These  are best & more powerful when eaten raw.   We're such slow  learners...
God left us a great clue as to what foods  help what part of our  body!
God's Pharmacy!  Amazing!

Grapes hang in a cluster that has the shape of the heart. Each grape looks like a blood cell and all of the research today shows grapes are also profound  heart and blood vitalizing food.

A  Walnut looks like a little brain, a left and right hemisphere, upper cerebrums and lower cerebellums.  Even the wrinkles or folds on  the nut are just like the neo-cortex. We now know walnuts help develop more than three (3) dozen  neuron-transmitters for brain function.

Celery, Bok Choy, Rhubarb and many more look just like bones. These foods specifically target bone strength. Bones are 23% sodium and these foods are 23% sodium. If you don't have enough sodium in your diet, the body pulls it from the bones, thus making them weak.  These foods replenish the skeletal needs of the body.

Avocadoes,  Eggplant and Pears target the health and function of the womb and cervix of the female - they look just like these organs. Today's research shows that when a woman eats one avocado a week, it balances hormones, sheds unwanted birth weight, and prevents cervical cancers. And how profound is this?  It takes exactly nine (9) months to grow an avocado from blossom to ripened fruit. There are over 14,000 photolytic chemical constituents of nutrition in each one of these foods (modern science has only studied and named about 141 of them).

Figs are full of seeds and hang in twos when they grow.  Figs increase the mobility of male sperm and increase the numbers of Sperm as well to overcome male sterility.

Sweet Potatoes look like the pancreas and actually balance the glycemic index of diabetics.

Olives assist the health and function of the ovaries

Oranges, Grapefruits, and other Citrus fruits look just like the mammary glands of the female and actually assist the health of the breasts and the movement of lymph in and out of the breasts.

Onions look like the body's cells. Today's research shows onions help clear waste materials from all of the body cells. They even produce tears which wash the epithelial layers of the eyes. A working companion, Garlic, also helps eliminate waste materials and dangerous free radicals from the body.
Posted by Greg Simms at 4:47 PM 1 comment:

This recipe is from the cookbook of one of my favorite restaurants here in Orange County called Zov's Bistro.  Their food is inspired by the flavors of the Mediterranean and Middle Eastern cuisines.  I love it because it's so healthy, so flavorful, and all the ingredients are found in Creation.

Stick exactly to the recipe and don't skimp on the ingredients and you will find such an unbelievable balance of flavors that gets better and better with each bite! 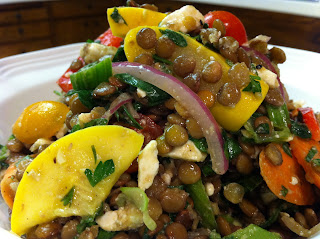 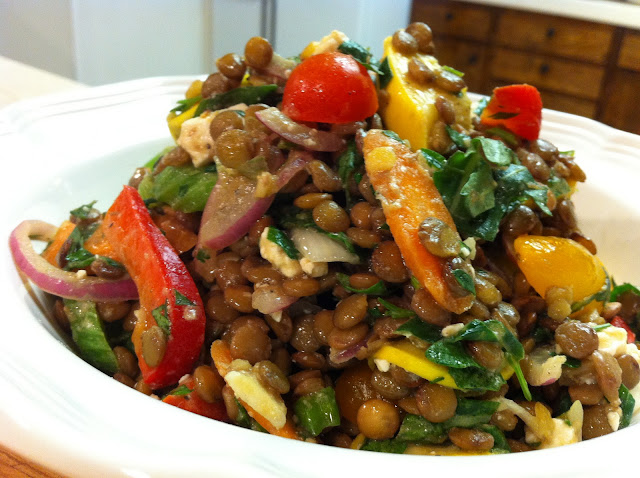 "You cannot reason with a hungry belly; it has no ears.”

"You cannot reason with a hungry belly; it has no ears.”  It's an old famous Greek Saying; so go ahead and fill that empty belly with a Greek Salad that is better than any you'll find.
Lettuce, Cucumber, Bell Pepper, Red Onion, Grape Tomatoes, Feta Cheese, Pepperocini, Kalamata Olives, Parsley and Pistachios.  The dressing is listed on my previos post, Lemon Vinaigrette.
Watch the video...
Posted by Greg Simms at 12:01 PM 1 comment:

Kale! Not just for hippies anymore!

Happy Valentines Day everybody!  For lunch, I took Gina to this new restaurant in Newport Beach.  It's a restaurant based off of Dr. Andrew Weil's anti-inflammatory food pyramid (below), which you can also download from his web site.  http://www.drweil.com/drw/ecs/pyramid/press-foodpyramid.html

Oh my gosh!!!!  We couldn't believe how delicious this place was...and SO healthy!  I had Hummus with veggies (instead of pita) and a Farm Vegetable salad with Spicy Chili Sesame dressing.  Gina had the Tempeh Bacon BLT and the Sesame Ginger Tofu Lettuce Wraps.  Everything tasted SO fresh and was bursting with flavor!
This is not a Vegan restaurant.  There is fish, poultry, and beef on the menu; plus a huge selection of cocktails and beer.  These types of restaurants have failed miserably in the past, remember Skinny Haven back in the 80s?  I can't recommend this place enough, I even think we're going back again tomorrow.  If you're ever in Newport Beach or Arizona (Biltmore, Scottsdale, Tucson) you HAVE to go to True Food Kitchen.  Everything on the menu was Eat What I Created approved!
www.truefoodkitchen.com 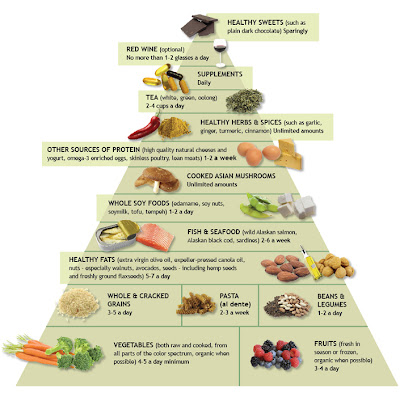 Greg Simms
Yorba Linda, CA, United States
Hi my name is Greg Simms. I’m a father of two boys, Jake and Leo. I’m also married to the most incredible woman, Gina! She saw me from across a crowded ballroom one night and said to her friend, “hey, you see that tall handsome guy over there? I’m going to marry him”. She had NO idea who I was, and sure enough, 1 year later we were married We reside in Orange County in Southern California, if you must know, Yorba Linda...yes, the birthplace of Richard Nixon. So, in between homeschooling my boys and grilling something, I also do voiceover work, I’m working on getting a television show produced, and I’m an air personality on a national radio network called Air1. Now I can add "blogger" to my resume. I recently graduated from Le Cordon Bleu Culinary Arts College in Los Angeles and then spent the Summer studying in Italy at a farm/restaurant/cooking school called Gusto al Borgo about an hour north of Rome. It was both life-changing and more intense than I ever imagined, and after learning how to cook in Italy wait 'til you taste my Bruschetta!